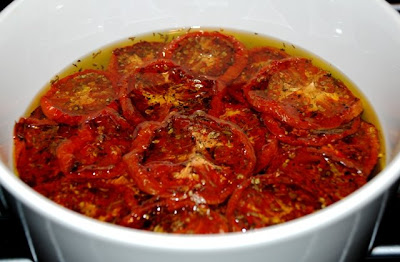 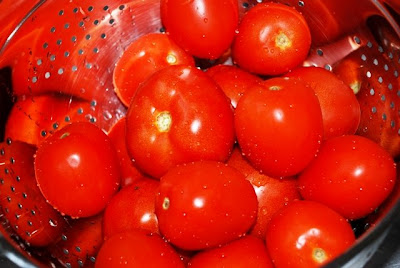 I am still using up the remaining tomatoes from my garden and decided to make my version of sundried tomatoes. I absolutely love a good sundried tomato, and this is a great recipe. I use these tomatoes in pasta, on pizza, or to make a yummy sundried tomato pesto. If you have seen the price of good pre-packaged sundried tomatoes, you will realize that its much about the same price as making your own, but these are much better. Also, make sure to use the oil, it will have a delicious herby/tomato flavor after a few days, and make a really delicious bread dip.

Pre-heat oven to 250 degrees and line a baking sheet with parchment paper. Cut tomatoes into ¼ inch-thick slices and lay in a single layer on cookie sheet. Next sprinkle tomatoes with the oregano, rosemary, thyme, and salt & pepper, don’t be shy with the herbs!
Bake until tomatoes are dried through, and almost crisp on the edge, about 3-4 hours. Remove from oven and cool completely.
Next layer tomatoes into a clean container and then pour enough olive oil to just cover top layer of tomatoes, seal tightly and store in refrigerator for up to one month. 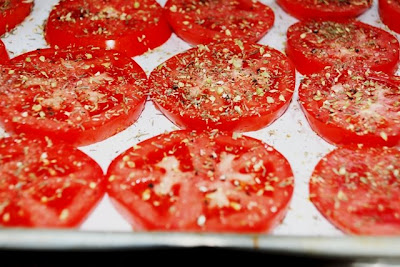 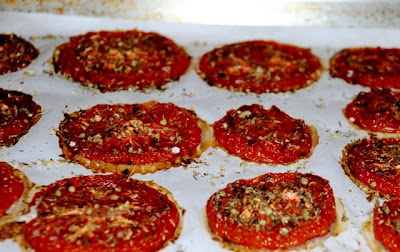 Here is how your tomatoes will look when they are done, much smaller and the skin will be a bit crinkly.

Email ThisBlogThis!Share to TwitterShare to FacebookShare to Pinterest
Labels: tomato

Home-made sundried tomatoes sounds perfect. I was wondering what you were doing with olive oil and tomatoes... now I get it.
First time here, like a lot of your recipes :)

They look so good. I love all the herbs you used. Don't you just love tomatoes fresh from the garden?