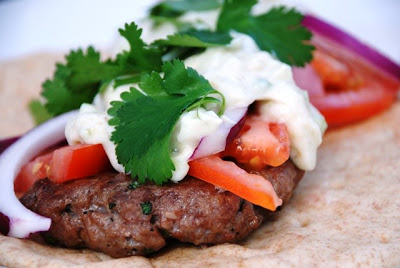 I was craving a gyro the other day and got inspired to make my own recipe for this, it turned out really well. I thought making the meat like a hamburger would allow me to flavor it throughout and also grilling it gave it a nice smoky flavor. I put lots of cucumber riata, tomatoes, red onion, and cilantro to garnish. I realized after I had made these that I completely forgot the feta! Oh well, they still tasted yummy. This recipe makes enough for about 6 gyros, so you could easily cut in half if your only serving a couple people.

Combine the ground lamb, salt, pepper, cumin, and chopped cilantro and mix together to combine. Form meat into hamburger sized patties (will make about 6). Grill until just done, let rest for a couple of minutes and then cut into strips. Serve on a warm pita with tomatoes, red onion, cilantro and cucumber riata.

Mix together and let rest for a few minutes for flavors to combine.
Posted by Jason at 12:58 PM

Those do look delicious. I'd love to try mixing in the feta, and maybe substituting flavorful flat-leaf parsley from my garden for the cilantro that I'm not crazy about. Thanks for the recipe.

Lydia, I can't imagine that parsley wouldn't be a perfect substitute, great idea. And yes, the feta would have really made these so much better, it's one of my favorite cheeses. Who would have ever thought that I would forget it?!

Hello Jason, I am a local Portlander as well! WE just made Lamb Gyros over the weekend! I love your blog!

Oooh, this looks really good. Today is grocery day for me ... I'll be picking up some lamb! Also, I'm a fellow local Oregonion, too!

Cheryl, I'm so excited to meet another Portlander blogger! Isn't lamb the best?
Paula, so glad to inspire you cooking, this is definitely worth trying out!