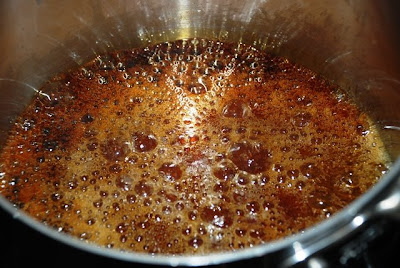 The Caramel Sauce...this is how dark it needs to be 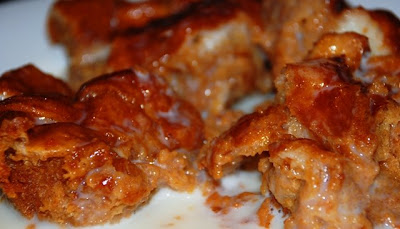 Enjoy!
This recipe was inspired from Nigella, I saw her make this on tv a while back and thought it was such a great recipe. I love the caramel sauce that you make first, it really adds a depth of flavor to the dish my regular bread pudding recipe doesn’t offer. She didn’t serve her pudding with a sauce, but I couldn’t resist adding this for the perfect touch. I think I’m going to go heat a little bit of this up right now, it will be the perfect ending to my day!

Place the croissants in a large baking dish and pre heat the oven to 350 degrees. In a large saucepan, add the sugar and water and place over medium high heat. Cook, without stirring until the sugar turns a deep golden color, about 5 minutes. Turn heat down to low, add the Half & Half, and stir vigorously with a whisk, and watch out, it will sputter quite a bit! Continue stirring until well combined, some of the caramelized sugar will form a ball, but keep whisking, it will become melted again. Now add the eggs, cinnamon, and brandy, stir to combine. Continue to cook over low heat until the sauce thickens slightly. Pour the sauce over the croissants and let sit for at least 10 minutes, or until the croissants have absorbed the sauce. Place into oven and bake for 30-40 minutes, or until puffed, golden brown, and set.
Serve warm with brandy cream sauce.

Heat the cream, sugar, cinnamon, and butter in medium saucepan until almost boiling. Mix the brandy and cornstarch together and stir into the cream mixture. Bring to a light boil, and cook until thickened.
Posted by Jason at 10:33 AM

This bread pudding sounds and looks absolutely delicious! Thanks for posting the recipe.

I once saw Paula Deen make a bread pudding with stale donuts. Can you imagine the deliciousness?

I am sooooo glad there are no calories in photographs! What a sinfully delicious bread pudding.

Oh my. I love bread pudding and this looks scrumptious!