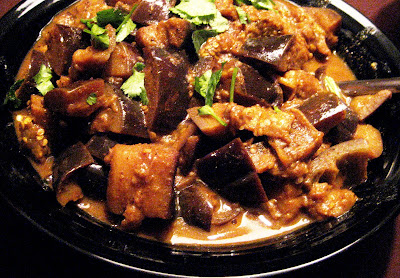 This dish has such a nice blend of spices, it's sweet, spicy, and you can taste the hint of cinnamon that is in the garam masala. The eggplant comes out really nice and tender and picks up all the flavors of the sauce. This is good as a side dish, or even with rice as a vegeterian meal.

In a small bowl, combine the garam masala, coriander, and turmeric, and cumin. In a measuring cup, stir together water, sugar, and vinegar. Heat the butter in a large, heavy nonstick skillet over moderate heat. Add the spices and cook, stirring, until fragrant, about 1 minute. Add eggplant and salt and toss to coat with the spice mixture. Stir vinegar mixture and add to eggplant mixture. Simmer mixture, covered, without stirring, 10 minutes, or until eggplant is just tender. Uncover skillet and cook eggplant mixture at a rapid simmer, without stirring, until liquid is almost evaporated and eggplant is slightly charred (but not burned) on bottom, about 15 minutes. Remove skillet from heat and let eggplant stand, covered, 5 minutes. Transfer the eggplant to a serving bowl, sprinkle with cilantro, and serve with rice.
Posted by Jason at 12:41 PM

this meal was not as good as i would have thought. i love eggplant all types of it, but this was disgrace!