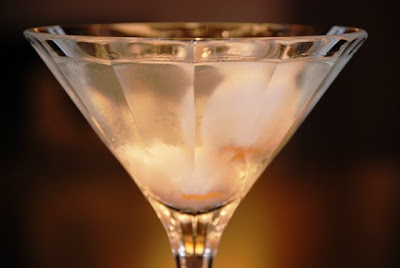 I absolutely love the flavor of lychee, it's so unusual and indescribable I'm not even going to try. It's a fruit native to China, and has a very short season as a fresh fruit in the US, about 7 weeks to be exact. I have only been able to find fresh lychee's at the Asian super marked during the later part of summer.
For this cocktail I had to resort to a canned lychee, and used the syrup as part of the flavoring. It's light, refreshing, and in-between citrus and peachy in flavor. You must use a very high quality vodka in this drink, as the lychee has a very light flavor, and anything less than top shelf would definitely overwhelm the delicate, delicious flavor of the lychee.
Lychee Martini
3 Ounces Good Vodka
3 Ounces Lychee Juice (from the can)
Lychee, for garnish
Shake the vodka and lychee juice in a cocktail shaker full of ice until very cold, strain into a martinin glass, garnish with lychee's and serve immediately.
Posted by Jason at 3:02 AM

Email ThisBlogThis!Share to TwitterShare to FacebookShare to Pinterest
Labels: drinks

Ive only had lychee martinis at bars, but should definitely make this at home. Yours looks delicious!

Ah, my favorite martini! I always order this at restaurants if it is in the menu and have a homemade version in my blog too.

Saw this post on Craigslist! Love lychee....but moreover I LOVE that martini glass!! Any idea where to find them?

I second the request for the glassware origins. Please tell.

The glasses are Nachtmann brand, which are made by Riedel. I got them at Sur La Table several years ago and have tried to add to my collection and can't find them anymore. Let me know if you find them I would love to add to my set. I have the wine glasses and martinin glasses, would love to find a champagne flute!

A friend made these for me, using a good vanilla vodka - amazing! He said they were called Shoju - with is conveniently similar enough to the Korean drink that I'm dubious.

Or maybe it was Shujo...


Whatever you call 'em, they're good!

Looks like this is the Aspen pattern. The champagne flutes are even on sale.