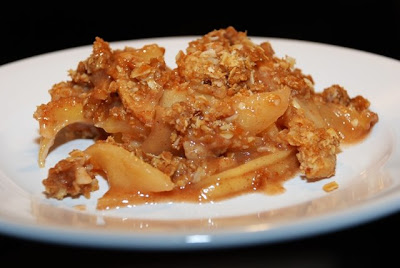 I had some apples in my fridge that I had forgotten about, I was going to make apple sauce to go with a pork dish, but decided that an apple crisp would be so much better. I love the crumbly slightly crunchy topping with the lightly sugared and spiced apples, it’s truly a match made in heaven. Normally I would have served this with a big scoop of vanilla ice cream, but since it was an unplanned dessert, I had to go without.

Pre heat the oven to 350 degrees. Skin, core and slice apples into ¼ inch thick slices and place into a large bowl. Next, sprinkle with the apples with the sugar 2 tablespoons flour and cinnamon, mix to coat. Place apples in a medium sized greased baking dish.
To prepare the topping combine the oatmeal, brown sugar and ½ cups flour. Add butter and using your fingers or a fork blend in the butter until the mixture comes together and forms large crumbs. Sprinkle topping over apples.
Bake the apple crisp until apples are tender and topping is golden brown, about 30 minutes. Let cool for a few minutes before serving.
Posted by Jason at 11:53 AM

Oh Jason. I have such a sweet tooth right now. I can almost smell the cinnamon. It looks great!

I love the aroma of baking apples in my kitchen -- it's so much a part of this season.

It looks delish, with or without the ice cream.

I made this on Sunday night and it was FABULOUS! Very easy (and I had all the ingredients in the pantry). Thanks for sharing. Stacy

Your photos are stunning! The recipe looks absolutely delicious. We're planning to head to the mountains next weekend and I'm going to try this recipe at our cabin. I'll be the only girl amongst a pack of young men and a husband...the perfect audience for which to prepare such a yummy looking recipe!