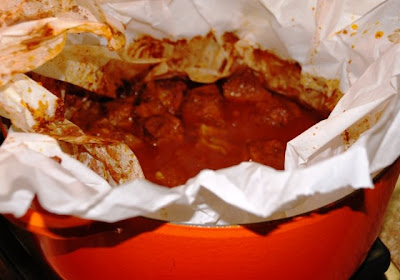 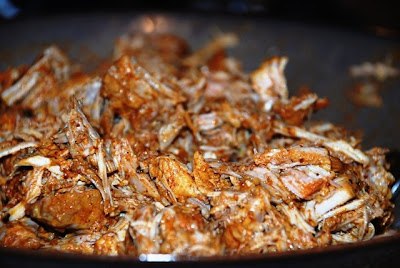 I fell in love with this recipe at a Christmas Eve Party-my friend Andy made this recipe and it was love at first bite!
I was in Sunriver over Memorial Day weekend and made this for all of my friends staying with me at the condo. This recipe makes a ton, so invite lots of people over. There were five of us we had at least half of it left over. I love the tanginess of this recipe and it also has a really nice depth of flavor, with an intense citrus undertone from the lemons. I used the rest of the meat for pulled pork nachos which were equally delicious.

Heat all of the spices in a frying pan until fragrant. Place into a mortar and pestle and grind into a fine powder (or you can use an electric coffee grinder.)
Remove the seeds from the jalapeno peppers and chop coarsely.
Process the orange juice, vinegar, jalapenos salt, garlic and the spice powder in a blender until liquefied. Add the lemon juice and tequila and puree until incorporated.
Cut the pork into 2 inch chunks. Leave the fat on the meat, to keep the pork moist. Place in a large self sealing plastic bag with the marinade. Seal the bag and turn to evenly coat the meat. Refrigerate for 8-24 hours.
Heat oven to 325 degrees. Add the meat to a large dutch oven lined with parchment and fold parchment over the top of the meat to completely cover. Cover the top of the dutch oven with foil and then place on the lid, to seal in the steam. Roast for 4 hours. Open packet carefully; the meat should shred easily with a fork if done.
Serve over rice or shred and serve on tortillas to make tacos.
Posted by Jason at 3:04 AM

Scanning the list of ingredients, I can already tell it tastes great! I'm definitely bookmarking this recipe. Thanks!