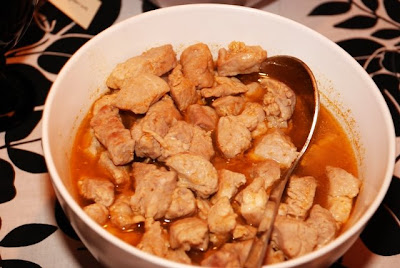 This dish was the star of our meal, as pork should always be! I love nothing better than really good, tender juicy pork carnitas, and this was the real thing. I usually don’t do well frying meat in lard, but I do have to admit this was really amazing! You can stop at that point if you want, but you can also infuse the meat with a lot of flavor after it’s cooked by braising it in sofrito, as this recipe shows. This recipe is really spicy, if you like a more mild dish, just reduce the amount of peppers, or remove the seeds.

Place the pork loin in a bowl and sprinkle with the salt, stir to coat and let sit for a couple of hours.
To make the sofrito, combine all remaining ingredients in a blender and puree.
Heat the lard in a very large wide deep pan and fry the meat over medium heat until very tender and just barely starting to brown, about 30 minutes. Remove the meat and drain on paper towels. Next pour lard from pan and wipe out, place meat back in, add sofrito and cook for one hour over low heat. Serve with tortillas and beans.
Posted by Jason at 5:12 PM

Can I come for dinner please? This looks amazing. I have never used lard in my cooking (I just can't bring myself to do it) but I have no problem eating someone elses cooking that used lard. It looks fantastic Jason!

Sounds delish, Jason. I have no problem with the lard, my mum used to use lard in her cooking when I was a kid.

Just stopping by to wish you a very Merry Christmas and a Happy New Year.